Asir translates as “rough country”. Asir is located in Saudi Arabia on the south-western coast of the peninsula. The rough country begins offshore with dangerous currents. Fishing dhows making their way to land at seasonal fishing stations also have to be wary of the coral reef that extends along the Asir coastline. The breaking waves are a give-away to the location of the reef. The immediate change in the color of the water, deep water beside the shallow water of the reef, also reminds you
of the dangers that you cannot see. Ironically, the rough country of Asir is also the most agriculturally fertile region of the peninsula.

This is Triggerfish. It is a tropical fish that migrates in the warmer currents of summer to New England. It is also one of the most widely abundant fish in the ocean, with over 40 different varieties. They are also a reef dweller and one of the more spectacularly  colored fishes in the sea. There is plenty of this fish species and are definitely worth tasting. Try it before our oceans acidify and it is priced out of the water. Credit for this fish goes to Jason Tucker of RedsBest Seafood at Government Centre Farmers Market. The freshest fish in Boston.

Kabsa is the national seasoning of Saudi Arabia. Traditionally, it was or is used to season chicken, or sheep, or camel. The inland town of Khamis Mushayt is a center of trading along the spice route in this region. Fedayeen or peasant fish cooks, in this case, blend their own bag of sunshine to cook fish. Kabsa includes turmeric, coriander seed, black peppercorns, ginger and cardamom pods. However, each dhow or fishing station will make their own blend based on what is available to them. Asir has always been a player in the spice trade historically and serious cooks do not give their measurements away easily, always holding onto one last secret ingredient or source of supply in order to show who is the best cook.

Even though triggerfish is a smaller fish, it is naturally territorial in the reef. Indeed, I have heard of divers being attacked after disturbing their nests. They are well equipped with teeth and they will draw blood, not a good thing in a reef full of barracuda and shark. There is also stonefish in the shallow wading waters.
These filets are about 4-5 ounces each, which means that they will cook quickly. I rubbed them over with olive oil and kabsa seasoning, then added thyme, minced onion and preserverved lemon.

Kabsa spiced fried eggplant for triggerfish. As a defensive posture, the fish can raise a dorsal fin which is locked into place by a smaller secondary fin. This second fin must be “unlocked” before the larger fin can be reset. And they will attack you, if disturbed. 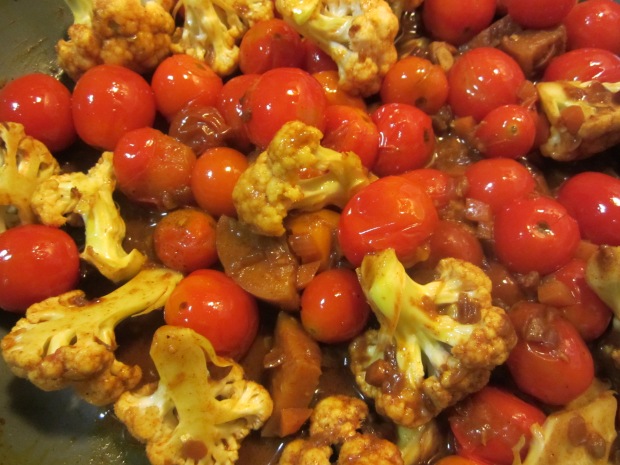 It was the Arabs that introduced cauliflower to Europe. I cooked the cherry tomatos so that they would go pop, and release their juice. I want the cherry tomato juice to be the main body or vehicle to carry the spice nuances. Kabsa is warm but you can add heat. A touch of honey can also work to smoothen out the rough edges of the spice. 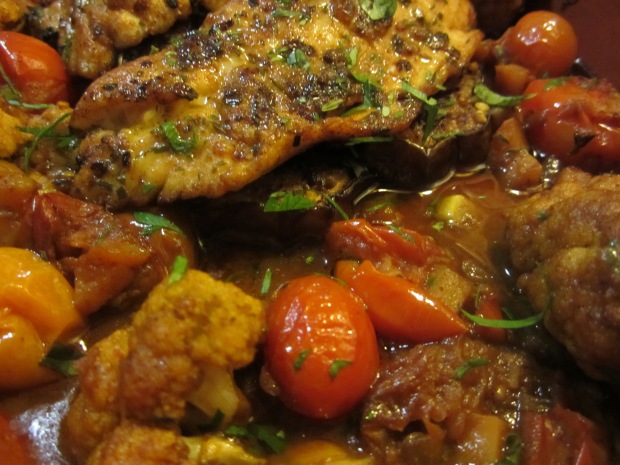 Sun setting on Asir. The mountains are forty miles from the coastline. They range as far as the eye can see from the beach and extend up to 7,000 tall and even though it is humid at the coast, the wind brings scents of mountain herbs like thyme, arugala blossom and rosemary. Full of lure and intrigue for an off loaded fisherman. A caravan will pass through this area in a day or so en route to Khamis Mushayt, located in the mountains. It is time to prepare for desert travel and cooking on the ship of the desert.

Translated, the Arabic reads as “produce of Saudi Arabia”. The blackseed in question is Nigella. I know it colloquially as “Love in a Mist”. It is black cumin seed and the finest honey in the peninsula comes from Najran, right on the edge of the Empty Quarter, the Rub’al Khali. Or the desert of classical icons. There is no such thing as sugar in that region. It is all about the honey. Thanks for reading. Eat like a peasant.

My name is Raymond . I am from Ireland and currently live in Portugal. I relocated here after spending many years as a professional chef in Boston, Massachussets. This blog is an attempt to showcase and highlight my twist on food and cooking, as well as an expression of my interests. I'm busy like everyone else and this is the way that I like to cook. Eat like a peasant.